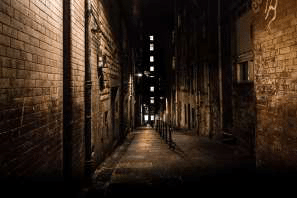 As the long-coated man slunk down the fetid alley, he had the strangest instinct that tonight was destined for misery. The creeping ivy that crawled down the crumbling brick reached out like clawed hands, the air was silent as the Welsh countryside, and the usual cat-droppings-and-perfume aroma was gone without a trace. Most nights, he would have supposed that to be a good thing, that that awful German woman who carried that stench was gone and he wouldn’t be scolded for his soft footsteps on the trash-littered cement.

But tonight, with a bitter chill nipping at his skin and an icy wind breezing down the narrow corridor, the man bit his lip, subconsciously picking up his steps… perfectly in time with the dry rustle of leaves on the night wind. Tonight, the absence of the usual–the cacophony of German screaming, the distinct litter box and perfume odor, the gamblers speeding recklessly down city streets, revving the engines on their off-brand sports cars– felt not like a blessing, but rather like he was all alone in the world.

The muffled, cottony hum of the distant City Central meant nothing to him. Or the ribbon of lights weaving its way across the black horizon. Those people were nothing to him. Nothing real, anyways. Just a far off dream, what the world thought about when they thought of our city. The world knew nothing of the outer boroughs at midnight. The world knows nothing, he thought. Nothing at all.

Unlocking the door to his apartment, the man stepped inside, wincing at the creak of his shoes on the floorboard. Madame Heleen isn’t home… there is not a single need to be quiet. But he did. Pushing the door shut with as little movement as possible, the man tentatively hung his coat on the rack. But the dark trench coat on the rack cast an eerie shadow in the stale light of the moon, that of a slender, dark figure inching up from behind… in a surge of panic, the man snatched the coat from the rack and flung himself into bed. The shadow was just that of a coat rack now, spindly wooden arms stretched out invitingly like an guilty mother beckoning back a scorned child.

Cursing softly, the man stretched, yawning and squeezing his eyes shut. When he opened his eyes he fell back with a scream.

A figure stood silhouetted in the doorway. Tall. Slender. Outlined in pale silver-yellow moonlight. And a thousand times more frightening than a trench coat on a rack. Gasping, he jolted out of bed, pinning himself against the wall.

“Who are you?!” He shouted, heart slamming against his ribs because he knew better than to ask. He knew exactly who she was, if the stories were true. Distinctively female. Deep purple cloak with silk threads that glimmered in the moonlight like the rushing waters of a mountain river. Hood resting barely on the top of her head; he had heard it was a way to show everyone that she didn’t need her face obscured by a mask or hood. He had never believed it. Now–mouth agape, mind pinwheeling, shivering with fear–there was no doubt in his mind that the rumors were true.

As though seeing right into his mind, she inched forward, chin tilted down at precisely the right angle that a shadow concealed her face.
“You know the answer to that question. And don’t bother to ask me the next one. I’ve tired of it, so let me just say it… why are you here?” The man expected her to chuckle condescendingly at him, like a villain in the movies, but she didn’t make a sound. A freezing breeze gusted through the open door. It took everything in his power to clench his teeth to keep them from chattering. Without preamble, she inched a step closer to him, shutting the door with an effortless silence he would kill for and continuing on.

“But… alas, you know that, too. Murder.” He quivered in place, opening his mouth to protest–”Ah ah ah!” She tittered, feet edging ever closer with each syllable she spoke. His mind flashed back to every sin he’d ever committed. Too many to count, he was sure. Drunken brawls, black market business dealings, dabblings in drugs of every kind–trying to find bliss, to no avail. All he managed to get himself was two ODs, empty pockets, and nasty shiners that kept him from getting a respectable job. His sins were many, and he had a lot of company in that, at least. Everyone in the outer boroughs was hell-bound. There was no way around that.

But… murder? Did he ever commit murder? Drunken nights flashed in his eyes, hazy blurs, eternally dark alleys after dusk when all he could see was the glint off a person’s hair in the moonlight. In the perfect world, nobody would have to question whether they had slaughtered an innocent person. But this was not the glistening utopia of the City Central. In the sinful, disgusting outer boroughs, there was no way of knowing.

“I’ve never murdered anyone…” he said, unable to hide the slight rise in his voice at the end of the phrase that made it a question. Coal black eyes glinting as bright as the dagger she withdrew from her cloak, the vigilante girl stared into his soul.

“Shame,” she cocked her head, mimicking deep thought, “that you’ll never truly feel the guilt of that night.” Stepping a hair closer, her face was illuminated by the silvery yellow moonlight. Black, oil slick hair hung around her cheeks in effortless waves, a stark contrast to the colorless pallor of her skin. She was the vision of an assassin, a lethal goddess of the night: mouth drawn up in an almost smirk, crow-like eyes glittering dangerously, a rigid tension humming in her every muscle.

“Please… I’ll call the police! I will!” he shouted. There was no thought dominating his mind, only a raw fear that rendered him utterly helpless. His bluff was just that… a bluff. He couldn’t afford the luxury of a cell phone, almost no one could in this neighborhood.

He should have heeded the warning. Stayed indoors with as much food as he could afford. Boarded up his doors, nailed plywood to his windows till not a single sliver of sun shone through. That’s what all the sinners should do. The man thought, quaking under the intensity of her glare. That’s what I should have done a long, long time ago… back when I first heard the rumors. The rumors of a vigilante prowling the outer boroughs, dealing justice to all the sinners.

Sensing his tumultuous thoughts, the girl grinned, showing off an array of teeth that made him recoil. Metallic purple bands stretched over silver brackets, shimmering in the pale light. The braces on her teeth were not something you expected from a villainous assassin or a novel-protagonist crime fighter. They were an anomaly. An unexpected reminder that the girl–standing before him with the malice of a crouching leopardess–was just a teenager.

His heart stalled. Screams bounced in his mind like marbles crashing onto a tile floor, fragments of half-formed drunken memories swirling elusively in the depths of thought. There was no way for him to truly know whether he had done it during a blackout—but why, then, did the name make his skin prickle with goosebumps?

Paisley Renee. Visions of innocent caramel eyes flashed in his mind. Eyes that were protective. Eyes that were sweet. Eyes that reflected a towering man, face flushed red from heavy drinking, frothing at the mouth he was so intoxicated.

I murdered someone. The thought was a slap to the face. Recoiling against the wall, he wished for a quick, painless end to it all. A confused wave of guilt washed over him.

The outer boroughs were still. The air was abruptly cold, the fetid smell dimmed slightly, the jaundiced moon beaming a spotlight on the standoff.

With one more step, she was close enough to him that the man could feel her calm breaths stirring his mussed hair. The girl gripped her dagger with renewed intensity, poised to strike. Resolute, holding his breath in the grim silence, he begged the clock not to chime. It was edging towards dusk. And everyone knew what happened at dusk. Heart pounding, skin tingling, eyes dilated in panic, the man squeezed his eyes tight and waited to die.

“What time is it?” she insisted suddenly, gripping his throat in her bony fingers.

“What time is it?!”  He quivered, shuddering with terror, limbs like concrete and insides turned to jelly. His throat was constricting. Air rushed from his windpipe, the slim, feminine fingers crushing into his vocal cords.

“What time is it?” She bellowed, trembling with fury. Soulless black eyes and a dastardly grin barely visible. He shook violently, tears pooling in his eyes, praying to anything holy that that clock would not chime. 5 more minutes, 3, 2, he didn’t care. He wasn’t ready to die.

Face red as the crumbling brick in the alley, eyes bulging. Her victim was ready to go. But not yet. The clock hadn’t chimed yet. She always waited until midnight. Midnight was a time of isolation, death, reckoning. The perfect time.

Pressed into the corner as far as he could go, mind whirling with his sins, he prepared to die. 5 more minutes… the man bargained desperately to the lord up above. He should have known that there was no god in the outer boroughs, only demons lurking around every corner… because at just that moment, his worst nightmare came true.

The clock chimed, and he felt his body go slack with fear as each hour rang out in the dark room.

1. 2. The girl hissed at him with a raw anger like a mother cougar defending her cubs, bearing her metal-clad teeth.

5. 6. “For justice.” The girl whispered, counting the chimes with a cruel grin.

7. 8. “For the people.” His whole body shivered relentlessly, tensing, prepared to feel the serrated blade.

12. “Midnight.” She whispered. A surge of heat rushed through his body as the dagger plunged into his gut. He toppled, feeling the yank on his stomach as the blood-slicked knife was pulled from his intestine. The world darkened. Each nerve was on fire. He saw her turn off the weak lamp and quietly close the door, gone as quickly as she came. The Midnight Rogue had taken another victim.

Apocalypse 6–Back from the Dead

Writer’s Wednesday! Into the Crypt

Sharing Our Stories: Language, Communication, and Why Words Matter

Writer’s Wednesday! 🌠Without a Trace

A house is just a house- A Writer’s Wednesday Poem!

Writer’s Wednesday! Back to reality

View all posts by AutumnB17